The History of Yoga

Since launching our app, Yoga has been a large part of our offering. It’s something that we hold in high regard for improvements in both mental and physical wellbeing… Yoga really hits the spot!

It’s often hard to explain what yoga is and most often have very different ideas about what to expect. We’ve done our research and here’s what we found!

The History of Yoga

Yoga is a physical, mental and spiritual practice that originated in ancient India. First codified by the sage Patanjali in his Yoga Sutras around 400 C.E, the practice was in fact handed down from teacher to student long before this text arose.

Traditionally, this was a one-to-one transmission, but since yoga became popular in the West in the 20th century, group classes have become the norm. The practice aims to create union between body, mind and spirit, as well as between the individual self and universal consciousness.

Such a union tends to neutralise ego-driven thoughts and behaviours, creating a sense of spiritual awakening. Yoga has been practiced for thousands of years, and whilst many different interpretations and styles have been developed, most tend to agree that the ultimate goal of yoga is to achieve liberation from suffering.

Although each school or tradition of yoga has its own emphasis and practices, most focus on bringing together body, mind and breath as a means of altering energy or shifting consciousness.

How does modern yoga compare to the traditional version?

Modern yoga is most commonly associated with the physical practice of asana, a series of postures often weaved together in styles such as Vinyasa Flow or Ashtanga. Asana practice is generally intended to build strength and stamina, to improve flexibility, coordination and balance, and to relax the body. However, this provides only one small aspect of the tradition of yoga as a whole.

The Eight Limbs of Yoga

Patanjali’s Yoga Sutras provide the traditional foundation of yoga, in which he outlines an eightfold path of the practice. Known as the ‘Eight Limbs of Yoga,’ this path offers a guide to individuals who are dedicated to creating a union between body, mind and spirit.

Each of the Eight Limbs offers a means of living with more integrity, self-discipline, respect for nature and connection with the spiritual aspects of life. These eight practices are intended to be carried out in a holistic and integrative manner:

5. Pratyahara – Withdrawal of the senses

8. Samadhi – Liberation or blissful union with the Divine 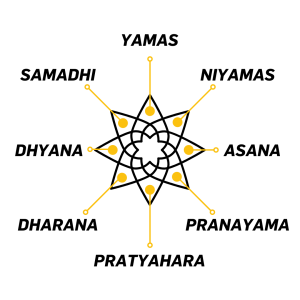 Want to keep up to date with what’s going on at House Starks including special offers and any exciting news why not join our mailing list.

👑 Jubilee Weekend Throwdown 👑 In the lead u

Week one of our New Online Block: Complete ✅ Ou

Congratulations to @lisafrankers on being our memb

In agreeing to this waiver, I agree not to hold Starks Fitness or its trainers responsible for any injuries or other misfortune sustained while attending services.