Upon falling asleep our body passes through four stages of ‘sleep cycles’ one complete cycle is roughly 90 minutes in duration. The stages within each cycle have their own benefits, which is why it is crucial we get not only the correct duration but the correct quality of sleep in order to see the benefits.

During the phases of NREM (N1, N2, N3) sleep, the muscles retain the ability to function, though they typically remain still. Brain waves are less active and heart rate, blood pressure, and breathing… slow. In NREM sleep, as the name suggests, the eyes are still or move minimally.

In REM sleep, the eyes move rapidly, the muscles are mostly or completely paralyzed, and dreaming is vivid. Brain waves during REM sleep are similar to brain waves that occur during wakefulness. REM sleep is the stage of sleep that most closely resembles being awake.

N1 – The lightest stage of sleep, and occurs in the moments when the wake state of the body transitions to the sleep state.

N2 – Approximately half of the four cycles of sleep are spent in the N2 phase, the most prevalent phase of sleep.

N3 – Referred to as slow-wave sleep due to the synchronized brain waves visible on an EEG.

REM – Occurs at the end of each cycle, it is the lightest stage of sleep besides N1. 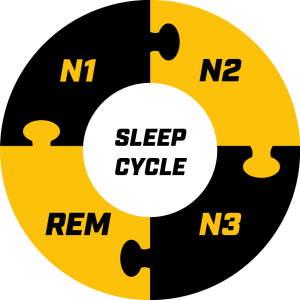 During N1 sleep, small shifts back and forth between brain waves may give the sleeper the sense that they are still awake. Sleepers may be roused quite easily from this stage of sleep, and might not realize they’re no longer fully alert.

The transition to N2 causes pronounced physical changes, which include:
A halt in eye movement
Reduced environmental awareness
The decrease in heart rate and body temperature
Inconsistent fluctuations between muscle tension and relaxation
Relaxation of the upper airway muscles

Sleep talking may occur during both the N1 and N2 stages of sleep, as may brief episodes of awakening and falling back to sleep.

N3 usually begins approximately forty minutes after first falling asleep, and is the deepest and most restorative of all the sleep stages.
Because N3 sleep is so deep, it may be quite difficult to be awakened from. A sleeper roused during N3 may feel groggy and disoriented, and mental performance may be impaired for 30 minutes or longer.
During N3 sleep, the following physiological changes occur:
The body releases hormones to aid in appetite control
Blood flow to the brain decreases, while blood flow to muscles increases, allowing them to receive oxygen and restorative nutrients
Memory consolidation continues
Blood pressure and heart rate decrease further
Breathing becomes slower and more rhythmic
Sleep spindle activity in the brain decreases

N3 sleep is essential for the recuperation of the body, including growth and repair of muscle, bone, and other tissues. Glial cells receive sugar during this phase of sleep, allowing them to provide energy to the brain. This phase of sleep is also essential to strengthening and supporting the immune system.

Though REM sleep occurs at the end of each cycle, it is the lightest stage of sleep besides N1. This phase begins with a signal from the pons, an area at the base of the brain. The signal travels through the brain to the cerebral cortex, the outer layer of the brain responsible for processing thoughts and information. Dreams are thought to originate from this area of the brain.
The stage of REM sleep is characterized by:
A distinct sequence of body movements that indicate the transition out of N3 sleep
Paralysis of the muscles, known as REM-atonia
Rapid and random eye movements
Fluctuations in breathing, circulation, and body temperature that are unique to REM sleep, and don’t occur at any other time during sleeping or waking
Vivid dreams

During NREM sleep, the mind is restful, while during REM sleep the mind is active and energized. Brain waves appear fast and desynchronized, similar to the state of being awake – REM is sometimes referred to as “paradoxical sleep” due to the similarities in functions with a waking brain. The REM phase lengthens with each consecutive cycle, with the final REM stage lasting approximately an hour.

Want to keep up to date with what’s going on at House Starks including special offers and any exciting news why not join our mailing list.

Breathwork is an incredibly powerful tool for many

Week one of our New Online Block: Complete ✅ Ou

Fighting a festive slump? Join our Bristol based

In agreeing to this waiver, I agree not to hold Starks Fitness or its trainers responsible for any injuries or other misfortune sustained while attending services.